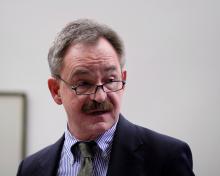 John Harley Warner, an historian who focuses chiefly on American medicine and science, received his Ph.D. in 1984 from Harvard University (History of Science), and from 1984-1986 was a Postdoctoral Fellow at the Wellcome Institute for the History of Medicine in London. In 1986 he joined the Yale faculty with a primary appointment in the School of Medicine, where he is now Chair of the Section of the History of Medicine. His research interests include the cultural and social history of medicine in 19th and 20th century America, comparative history (particularly British, French, and North American medicine), and medical cultures since the late 18th century. He is especially interested in clinical practice, orthodox and alternative healing, the multiple meanings of scientific medicine, and the interactions among identity, narrative, and aesthetics in the grounding of modern medicine.

A book with the working title The Quest for Authenticity in Modern Medicine.

A study of the transformation of the hospital patient chart, 19th through 21st centuries, tentatively titled Bedside Stories: Clinical Narrative and the Grounding of Modern Medicine.

A book-length study tentatively titled The Death of James Jackson, Jr. and the Birth of the American Clinic.

Major Problems in the History of American Medicine and Public Health, Boston: Houghton Mifflin, 2001; co-editor with Janet A. Tighe.

“Making the Case for History in Medical Education,” Journal of the History of Medicine and Allied Sciences 70 (2015): 623-652.  (With David Jones, Jeremy Greene, and Jacalyn Duffin).

“The Art of Medicine in an Age of Science: Reductionism, Holism, and the Doctor-Patient Relationship in the United States, 1890-1960,” in Nanami Suzuki, ed., Healing Alternatives: Care and Education as a Cultural Lifestyle (Osaka: National Museum of Ethnology, 2014), Senri Ethnological Reports, No. 120: 55-91.

“The Aesthetic Grounding of Modern Medicine” (The Fielding Garrison Lecture) Bulletin of the History of Medicine, 88 (2014): 1-47.

“The Humanising Power of Medical History: Responses to Biomedicine in the 20th-Century United States,” Medical Humanities, 37 (2011): 91-96; earlier versions in Cheng Yuzhiu and Gu Xue, eds., Selected Papers of Beijing Forum 2010: The Harmony of Civilizations and Prosperity for All (Beijing: Peking University Press, 2011), pp. 254-267,

“’A Pledge to the World’: Medical Schools and the Making of American Physicians in the Mid-Nineteenth Century,” in Kerry L. Falvey, ed., Medicine at Yale: The First 200 Years (New Haven: Yale University Press, 2010), pp. 48-51.

“Anatomical Instruction and Training for Professionalism from the 19th to the 21st Centuries,” in special issue of Clinical Anatomy on medical professionalism and gross anatomy teaching (with Lawrence J. Rizzolo), 19 (2006): 403-414.

Grand Narrative and Its Discontent: Medical History in the Social Transformation of American Medicine, Journal of Health Politics, Policy and Law, 29:757-780, 2004

The 1880s Rebellion against the AMA Code of Ethics: ‘Scientific Democracy’ and the Dissolution of Orthodoxy, in Robert Baker, Arthur Caplan, Linda Emanuel, and Stephen Latham, eds., The American Medical Ethics Revolution: How the AMA’s Code of Ethics has Transformed Physicians’ Relationships to Patients, Professionals, and Society, Johns Hopkins University Press, 1999, pp. 52-69.

Orthodoxy and Otherness: Homeopathy and Regular Medicine in Nineteenth-Century America, in Robert Jütte, Guether B. Risse, and John Woodward, eds., Culture, Knowledge, and Healing: Historical Perspectives of Homeopathic Medicine in Europe and North America, European Association for the History of Health and Medicine, 1998, pp. 5-29.

American Physicians in London during the Age of Paris Medicine, in Roy Porter and Vivian Nutton, eds., The History of Medical Education in Britain, Rodopi, 1995, pp. 341-365.

The Fall and Rise of Professional Mystery: Epistemology, Authority, and the Emergence of Laboratory Medicine in Nineteenth-Century America, in Andrew Cunningham and Perry Williams, eds., The Laboratory Revolution in Medicine, Cambridge University Press, 1992, pp. 310-341.

Ideals of Science and Their Discontents in Late Nineteenth-Century American Medicine, Isis 82:454-478, 1991. Revised version to be reprinted as Professional Optimism and Professional Dismay over the Coming of the New Scientific Medicine, in John Harley Warner and Janet A. Tighe, eds., Major Problems in the History of American Medicine and Public Health, Boston: Houghton Mifflin, 2001, pp. 216-224.

Science, Healing and the Physician’s Identity: A Problem of Professional Character in Nineteenth-Century America, Clio Medica 22:65-88, 1991. Revised version to be reprinted as Science, Healing, and the Character of the Physician, 1820-1860, in John Harley Warner and Janet A. Tighe, eds., Major Problems in the History of American Medicine and Public Health, Boston: Houghton Mifflin, 2001, pp. 143-149.

From Specificity to Universalism in Medical Therapeutics: Transformation in the Nineteenth-Century United States, in Yosio Kawakita, Shizu Sakai, and Yasuo Otsuka, eds., History of Therapy, Proceedings of the 10th International Symposium on the Comparative History of Medicine–East and West, Ishiyaku EuroAmerica, 1990, pp. 193-223; reprinted in Judith Walzer Leavitt and Ronald L. Numbers, eds., Sickness and Health in America: Readings in the History of Medicine and Public Health, 3rd ed. University of Wisconsin Press, 1997, pp. 87-101.

Therapeutic Explanation and the Edinburgh Bloodletting Controversy: Two Perspectives on the Medical Meaning of Science in the Mid-Nineteenth Century, Med. Hist. 24:241-258, 1980.