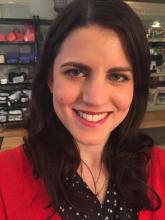 Sarah studies the history of exploration, field collecting, natural history museums and anthropology. She is particularly interested in the material culture of expeditions, including expedition provisions, equipment for field science, and collections of field specimens. Her research examines the movement of material objects in and out of various cultural and environmental contexts in the nineteenth and early twentieth centuries, particularly the Arctic and Antarctica, with a focus on how “extreme environments” are constructed, imagined, and experienced through material culture and travel and exploration accounts.

A native of White Plains, New York, Sarah earned a B.A. in Anthropology from the University of Chicago and an M.A. in Decorative Arts, Design History and Material Culture from the Bard Graduate Center of Bard College. Her M.A. thesis, which was chosen for the Clive Wainwright Award, explored (pardon the pun) the clothing worn by polar explorers of the early twentieth century, as a reflection of cultural and racial attitudes, corporate endorsements, and the image of science in popular media. Prior to starting her studies at Yale, she worked in administration at The Metropolitan Museum of Art in New York.