Home » News » Naomi Rogers lends her expertise to new film 'Just One Drop: The Story Behind the Homeopathy Controversy'

Naomi Rogers lends her expertise to new film ‘Just One Drop: The Story Behind the Homeopathy Controversy’ 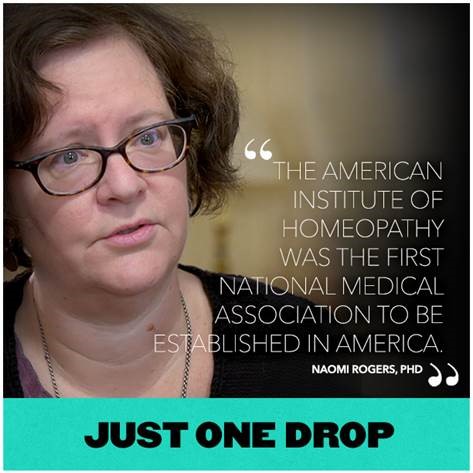 Just One Drop: The Story Behind the Homeopathy Controversy will premiere in New Haven, CT on October 16th and Hartford, CT on October 26th. Professor Naomi Rogers had this to say about the new film: “A few years ago I was asked to be a talking head in this film on the history of homeopathy.  The directors came to my house to interview me, and then over the next few years would sometimes ask me for advice about information or wording as they worked on the script.  It was fun, and I’m looking forward to viewing the finished product.”

For more information on the film read the write-up below and visit the film’s website to view the official trailer: https://www.justonedropfilm.com/

Just One Drop tells the little known story of homeopathy: the most controversial system of medicine ever invented.

Homeopathy is a specific form of medicine that uses minute doses of a highly diluted substance that stimulates the body to cure itself. To many, homeopathy seems implausible. They fear it is purely a placebo effect or worse, a form of deception or quackery. Yet, homeopathy has been around for over 200 years and is used by millions worldwide. The film explores the controversy, dispels myths and misconceptions, and asks whether or not homeopathy has been given a fair shake.