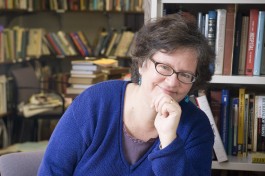 Abstract: In 1971, before Richard Nixon made his historic visit, four American physicians and their wives went to the People’s Republic of China and returned amidst a growing public and professional interest in China’s Cultural Revolution and its implication for American health care. Soon groups of physicians, nurses, social workers and a range of health activists eager to see what was being called the “health nirvana” began to organize their own trips, a movement that continued until the late 1970s. This talk will ask why these groups – ranging from Black Panthers to members of the AMA – went to China and what ideas and practices they then sought to inculcate in the American context. A central issue in the U.S. was the problem of underserved and disaffected populations in the inner cities and in isolated rural towns. China’s barefoot doctors became seen as the solution to this and other health policy problems. Feminist activists, in addition, praised the politically aware, anti-elitist recruitment and training of barefoot doctors (who were mostly women) as wonderfully “unprofessional” and “consciousness-raising.” By the late 1970s, however, with the death of Mao and the reorganization of China’s economic system, American activists became more critical of their own naiveite and enthusiasm, especially around the idea of direct “transplantability.”