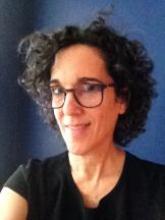 Joanne Meyerowitz joined the department in 2004 as Professor of History and American Studies.  She received her Ph.D. from Stanford University in 1983.  She is the author of Women Adrift: Independent Wage Earners in Chicago, 1880-1930 (1988) and How Sex Changed: A History of Transsexuality in the United States (2002), and the editor of Not June Cleaver: Women and Gender in Postwar America, 1945-1960 (1994) and History and September 11th (2003).  Before joining the faculty at Yale, she taught at Indiana University and the University of Cincinnati, and for five years she edited the Journal of American History, the leading scholarly journal in U.S. history.

She has won fellowships from, among others, the American Council of Learned Societies, the John Simon Guggenheim Foundation, the National Humanities Center, and the Social Science Research Council.  Her articles have appeared in the American Historical Review, Journal of American History, Journal of Women’s History, Gender and History, GLQ: A Journal of Gay and Lesbian Studies, Bulletin of the History of Medicine, and other publications.

Her research and teaching focus on twentieth-century U.S. history, women, gender, and sexuality.  She is co-director of the Yale Research Initiative on the History of Sexualities.

Her recent publications include: